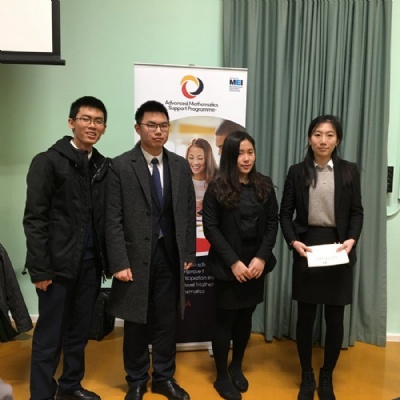 Earlier this term all Sixth Form mathematicians took part in the UKMT Senior Maths Challenge with 6 pupils winning a place in the next round of the challenge. By qualifying for the next round they have been awarded the title of Senior Kangaroo. These pupils sat a further 90 minute paper that will determine their final placement in the competition.

4 of the Senior Kangaroos made up a Senior Maths Team which travelled to Hardenhuish School in Chippenham to compete in the UKMT Senior Maths Team Challenge Regional Final. The team competed against some of the best mathletes in the country working for 3 hours to solve 50 complex mathematics problems as a team.

In addition to the Senior Maths Challenge, earlier in the term, 2 of our Year 13 students qualified for the UKMT Mathletical Olympiad for Girls. Only 1400 students qualified Nationwide, with the top 25% of entrants receiving a Certificate of Distinction.

The Olympiad consisted of a two and a half hour paper including 5 mathematical problems, requiring full written solutions. Congratulations to Polly who was ranked in the top 350 girls participating.

Polly will follow up her fantastic performance with an interview for Oxford University where she has applied to study Mathematics and Statistics at St Johns College.

Congratulations to all those who competed and good luck to Polly in her upcoming interview.