The Show Must Go On - Remote Musical Learning 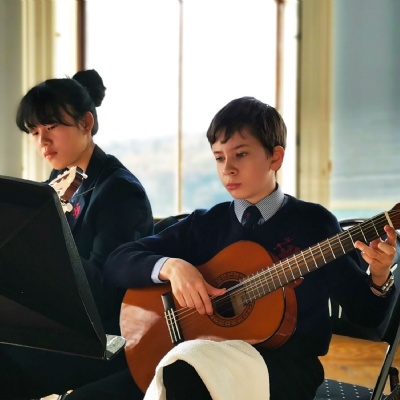 ‘If music be the food of love, play on’. This famous quote from Shakespeare's Twelfth Night stood the test of time throughout the Spanish Flu during the First World War and Influenza post the Second World War, where music could still be played in public. Sadly, due to the Covid-19 Pandemic concert halls were shut, record stores closed and choirs a distant memory. But what did this mean for young people who were still eager to learn a musical instrument?

According to a report by the Incorporated Society of Musicians (ISM) titled ‘The Heart of the School is Missing’ they found that almost one in ten primary and secondary schools had removed music from the curriculum. The report surveyed more than 1,300 music teachers in September 2020 which announced that there was a ‘genuine cause for alarm’ due to the virus and the future of music education.

Outside of the classroom, music lessons in primary schools saw a cut of 72% and 66% in secondary schools. “Beyond the intrinsic value of studying music for its own sake, there is a plethora of evidence that studying music builds cultural knowledge, creative skills and improves children’s health, wellbeing and wider educational attainment,” the report said.

Throughout lockdown, the power of music shone through as choirs and musicians collaborated online with virtual rehearsals and concerts streamed on social media. Many used music as an outlet to escape the everyday and schools embraced the benefits of digital learning as did Rendcomb College from the very start of the pandemic. Head of Teaching and Learning Natalie Johnston said: “The improvement of technology has been a blessing for teachers carrying out remote learning during this time. Music classes have been accomplished in live, online sessions and we are so pleased to have been able to carry on individual music lessons too, whilst other schools have been unable to deliver.”

Rendcomb College prides itself on its esteemed academia and opportunities to take on extracurricular activities. Natalie Johnston explains the importance of offering music lessons throughout the remote learning period, to help students keep broadening their horizons from home, “Music lessons are a great for students to let loose, express themselves and get creative. We didn’t want the challenges we faced to hinder our output to the students. So we ensured they were fully equipped and able to participate in all lessons as per the usual timetable.”

From singing lessons to individual instrumental lessons including guitar and piano, Rendcomb’s teachers have embraced the online learning environment so that younger students and older pupils alike, don’t miss out. This also counts for a number of the co-curricular programmes which have also gone digital, such as virtual coffee concerts, musical teas, and rehearsals for the string ensemble, lower school choir show, and lower school wind ensemble. The Director of Music has also run a programme of online 'supervised practice' sessions for students to collaborate. This cooperative and collaborative way of practising and performing music has certainly been well received by both parents and pupils.

Performing arts really is at the heart of everything at Rendcomb College. Whether that’s music classes in the Reading Room, or performances to 350 people in the £3.3 million state of the art Griffin Theatre. A true shame that many events had to be cancelled this year but hope is on the horizon. On top of providing individual virtual music lessons we are also running a programme of concerts too which we’ll send updates on in due course.