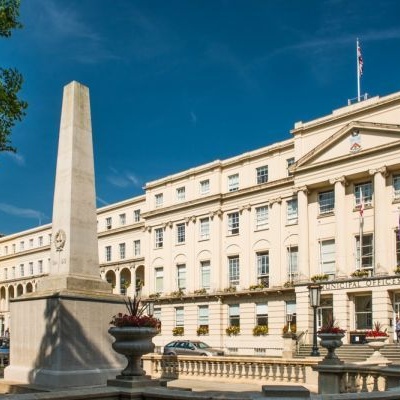 The elegant regency town of Cheltenham is conveniently close to Rendcomb College. Our five Cheltenham heritage highlights show why families will love exploring the town, on visits to this leading independent school in the Cotswolds.

Are you already familiar with Cheltenham, nestled on the edge of the beautiful Cotswolds in England? If you have already heard of it, there’s a good chance it’s due to the town’s connection to the noble sport of horse racing. Especially the Gold Cup National Hunt Festival held annually in March, which attracts competitors and fans from around the Globe.

Did you also know that the town – often referred to as the ‘Western Gateway to the Cotswolds' - has a superb antecedence as a seat of learning? Something that sits nicely alongside the fact that it’s the nearest big town to Rendcomb College.

Being so close to Cheltenham provides our students with abundant cultural, sporting and leisure opportunities. However, it also gives visiting families an inviting place to stay, particularly if they enjoy quintessentially English locations and heritage experiences.

To tempt you to linger, here are just five fascinating historical facts about Cheltenham.

For such a peaceful and pretty market town, Cheltenham has a remarkably long and illustrious history.

The fact it’s surrounded by rich agricultural land made it the ideal place to hold a market. By the 18th century, it was also a fashionable place to stay for health purposes. The town’s official crest features three pigeons, the species of bird believed to have peaked away at local fields exposing salt crystals at a local spring. This discovery led to Cheltenham being classified as an English Spa town and attracted a visit from King George III to treat his ailments.

By 1850, Cheltenham had become the most prominent town in the county of Gloucestershire. Since then, its development has been closely nurtured and protected, to retain its heritage and beauty while adding modern features of interest and value.

The spy centre of the UK

One of the most recent developments in Cheltenham’s history is its connection to the world of espionage.

Post-world war I, it became the location for a secret surveillance centre called the Government Code and Cypher School (GC&CS) Now it’s widely known, and renamed GCHQ (Government Communications Headquarters). Due to the shape of this vitally important intelligence building, you will also hear it referred to as ‘The Doughnut’.

The most complete regency town in England

The golden era of development in Cheltenham was undoubtedly the Regency Era. This has left a wonderful architectural legacy for today’s visitors to our popular boarding school. Admire noble sweeping terraces, the lovely Neptune Fountain and the superb parks for parading in.

Why not follow in the footsteps of the town’s devoted early 19th century visitors by sampling medicinal waters at various Cheltenham sites. Especially the blue-domed Pittville Pump Room by the lakes of Pittville Park; the only source of natural alkaline water in England!

British Polar Explorer, and the Wilson Art Gallery and Museum

As Cheltenham has such a colourful heritage, it also offers a well-curated museum. In fact, ‘The Wilson’ is Gloucestershire’s best art collection and museum.

It’s named after Antarctic explorer Edward A. Wilson and houses a fascinating archive of material on this local man’s contributions to natural history and discovery geography. As well as his artistic endeavours.

The Magic of Alice in Wonderland

Cheltenham is home to famous British people, including Zara Phillips (the Queen's eldest granddaughter) and her husband Mike Tindall.

However, it’s a fictional character that adds family appeal to visiting this lovely town. The stories of Alice in Wonderland and Alice Through the Looking Glass are believed to be based on Alice Liddell. She often visited her grandparents at Charlton Kings, which is a suburb of Cheltenham. She became acquainted with Charles Lutwidge Dodgson (author Lewis Carroll) in Oxford, but he visited her family in Cheltenham.

Cheltenham is clearly a lovely place to visit. If you time your stay right in 2021, you can join in with a myriad of festivals and events in the spa town, including ones dedicated to literacy, food and drink, jazz and music in general; as well as world-famous horse racing challenges of course.

Rendcomb College maximises on its glorious location to the benefit of its students. We also love hearing about family adventures when visiting the locality. If you need places to stay near Rendcomb College, we are happy to help with recommendations.